Joel’s 48th birthday was Monday. As a couple, we generally don’t exchange gifts–not for birthdays, holidays, or anniversaries. We do, however, usually exchange cards.

(Okay, confession time here: Joel called me from Walgreen’s the night before Valentine’s where he was buying the kids’ cards for their classmates and asked if we needed anything else. Oh no. It dawned on me I had not bought him a card and the next day was Valentine’s. So, I said, “Um, well, I haven’t bought you a card, YET. Really, I was going to.” He laughed and said, “You want me to buy my own card for myself?” Well, if you put it that way, yes. Love you!)

Both of us like the humorous cards better than the sappy, hearts and flowers cards. Funny is good, and a zinger or two is even better. This year, I was exceptionally pleased with my birthday card selection. But, more on that shortly.

Anyone who knows Joel well knows that he loves finding a bargain. Our basement is full of one man’s treasures, formerly another man’s junk. Garage sales. Going out of business sales. Mark downs. Flea markets. If I am guilty of owning too many purses and shoes (and really, is there even such a thing to be guilty of??), then Joel is condemned for never passing a yard sale without finding the next must-have item.

As a newly engaged couple, and in light of our quick romance and engagement, I slowly began to comprehend Joel’s compulsive impulsive inability to resist the siren song of a sale. We bought bedroom furniture together for our future home (yes, on sale), but we needed a mattress. No rush, or so I thought, since we had months to go before being married.

One weekend while in Knoxville seeing my parents, we climbed into the back seat of Mom and Dad’s car to go out to eat. A few minutes into the drive, Joel gleefully exclaimed that he had forgotten to tell me that he had bought a mattress. What? He had also forgotten to tell me he was even shopping for a mattress! Yes, he went on to say, he stumbled across a mattress outlet, became enamored of a mattress and bought it. Sputtering, I asked if it crossed his mind that a mattress purchase should have been made together, you know, so I could inspect it, lie down upon it, and assess it for comfort. Bewildered at my objection, Joel blurted out, “But, it was a GOOD DEAL! It was on sale!” My parents exchanged awkward glances with each other in the front as I fumed and in a solemn tone said, “But it is not a good deal if I do not like it.” Joel bleakly stared out the car window and softly said “oh!” as the implications of impending married life settled about him.

Now, almost seventeen years of marriage later, we still have that mattress, although now it is on our daughter’s bed. I did like it. I have not liked all of his purchases and our basement is the graveyard for many of the trinkets he has bought. (He vehemently denies that the basement has anything other than priceless finds in it.)

I have used his penchant for bargains to my advantage a time or two. But, none better than this week. As I stood in Walgreen’s looking for a birthday card, I found myself involuntarily laughing out loud in the aisle. I found it. The perfect card. The front had a picture of a donkey and a price tag that dangled from the card saying: 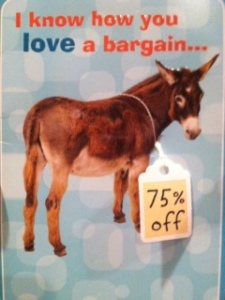 And inside, it said:

Joel loved the card. He rolled with laughter. He took it with him to a men’s breakfast to show to his buddies. As he pulled it out of his coat, he told his friends that when he opened it, he did not let me see him crying tears of happiness as he knew I finally truly understood him.

Now that is a good, no–a great deal if you ask me.