“Shoo, already!  Go home!”  And, then Joel said dryly, “I told you not to feed them.”  We teasingly said these comments to my sister, Cyndi and her partner, Sharon when they “randomly” ran into us for the third time at rest stops and fast food restaurants while driving home from Port Canaveral after our family cruise.

Before we left on the family vacation, Cyndi heartily made fun of my planning and organizational skills, which she guest blogged about here.  But, after spending a magical day (sun-up to waaay past sun-down) at two Disney parks with me and the kids, and then a five day cruise with the entire family, it would appear that she and Sharon were just simply lost without me, and they surreptitiously followed us from Florida, into Georgia, then South Carolina, and into North Carolina seeking reassurance and direction before the final and painful parting on I-40 as we turned toward Upper East Tennessee and they turned toward Knoxville.  Cyndi may have thanked me and said she could hug and kiss me for all the fun things we did.  I may have said she could kiss my….well, you get the point.

Our vacation adventures began when the kids and I left on Friday to drive to Orlando.  On Saturday, while the kids and I toured Sea World, Cyndi and Sharon drove from Knoxville to Orlando.  On Sunday, while we played at Disney, Joel preached in the morning service, then his brother drove him to Knoxville for a one-way late night flight to Orlando, where I picked Joel up after 11 p.m. from the airport.  On Monday morning, we all boarded the cruise ship.

On Saturday evening, as Cyndi, the kids and I drove to dinner in Downtown Disney, I heard one of the boys casually comment from the back seat, “oh, crap.”  I reflexively said, “Don’t say crap.”  And, then Sarah Grace, in her sweet but surgically incisive manner of speaking said “But Mom, you said that a lot yesterday when you were driving.”  I what?  I honestly didn’t recall that.  But, Cyndi, my front seat passenger and younger sister who is always at the ready to skewer me, encouraged her.  “Really, Sarah Grace?  What did your Mom say?”  Sarah Grace has a deadly knack for imitating people…her teachers, my mother, and apparently, me.  “Oh, she said ‘Crap, rain!’ and ‘Oh crap, traffic!’ and ‘Crap, you idiot driver!’ ”

Now, in my defense, the kids were angels during our twelve hour drive, and my vocabulary was angelic, at least until that last two hours in the car.  Before we left, I told the kids that there was only one of me and three of them on this adventure, and I needed them to put on their halos for the long trip ahead.  But, the last two hours were fraught with sporadic heavy storms coinciding with the entire Southern states’ mass pilgrimage into Orlando for Fall Break.  Traffic was intense and included several delays, while sudden bursts of rain from under-illuminated greenish-black clouds created slick roads littered with unpredictable drivers.  My anxiety level escalated, and it would seem that my vocabulary deteriorated, although I am glad my only offense was saying “crap”.  It could have been worse.

Cyndi seized the moment to inappropriately expand the kids’ lexicon.  She launched into an explanation of the phrase “crap-tastic”, a term the kids and I had never heard.  Cyndi offered examples and explained the requisite level of sarcasm and inflection needed.  Say you buy a cheap toy at the fair and it breaks on the way home, then you would say, “Well, that was crap-tastic”.  Noah immediately soaked in the use of this fun phrase and perfected the delivery.  Thanks a lot, Cyndi.  Aunt Cyn-deeee is beloved by her nephews and nieces for her fun-loving and mildly inappropriate teachings of which they know I will disapprove.

Our first night on the ship, our after dinner entertainment was an audience participation game-show in the ship’s two story theatre that seats about one thousand people.  Joel, Cyndi, and Sharon went to reserve seats while I took the kids to Camp Carnival.  I arrived slightly late to the show and found them sitting on the second row from the stage with the game already in progress.  I inconspicuously walked down the dark center aisle and slid into my seat among them.  The cruise director stood center stage under the hot spotlights and called out “Susan Cook, Cabin U107, come on up here!”  Huh?  Me?  Wrong name but right cabin number.  (Susan is a lovely name, but it is not my name.  Pet peeve.)  About then, Joel and Cyndi enthusiastically and conspiratorially nudged me out of my seat while saying (*wink wink*), “It’s you! It’s you! Go up there!  (I did not know they put my name in the hat during my brief absence.)

I uncertainly began up the stage’s center steps.  I knew this was a game of some sort, but I had not seen any of it yet.  The emcee said, “No, run back there!” and pointed to the back of the center aisle where the grand stairway to the balcony joined the theatre’s first floor.  Okay, I ran to where he pointed. The spotlight followed me.  “Now, run down here!”  Huh?  Oh, he means run down the center aisle slapping audience members’ hands, like in the Price is Right.  So, I ran.  Down the center aisle whooping and hollering.  And, ran up the steps and onto the stage.

I should mention that at this point, I had absolutely no idea what the contest was, but my competitive spirit kicked in and I was determined to win.  Two rolls of toilet paper sat on a table.  The cruise director called up another female contestant and two male contestants.  The gameshow was a mock up of Minute To Win It, and my challenge was to wrap my female partner in more toilet paper than our male opponents in the allotted time.  Oh, yes.  My mind began racing on how to do it.

If you have ever cruised, then you know it is impossible to walk in a straight line.  Ever.  The ship’s swaying and rolling causes unpredictable mild weaving as you walk, even when stone cold sober.  The drunks are highly entertaining on a ship, especially in high seas….was that me?  or the ship?…as you lurch about.  But, as I stood there on the swaying stage under the glaring lights, I calculated just how foolish I would look unsteadily running around my partner with the roll held on my two index fingers as a spool while I unwound cheap, thin, scratchy toilet paper around a total stranger from Georgia.  Never mind.  Silly or not, I was ALL IN.  I had a minute to win it!

Go! The buzzer sounded.  I bobbed and weaved in dizzying circles around my new friend as I wrapped her mummy style.  Ding ding ding!  We won!!  My roll of paper was about one-third slimmer than the men’s roll.

And, what pray tell, was the spectacular prize for this accomplishment?  Other than the fame and glory, of course, and other than the video of this contest that would loop all week on the ship’s closed circuit t.v.? It was a genuine- fake-gold- plastic-ship-on-a-stick.  It was mine.  All mine.  And you know what else?  It was positively crap-tastic! 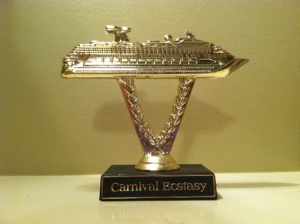 One thought on “Crap-tastic”